The storm, which made landfall in Florida on Wednesday, dumped heavy rainfall in Georgia and South Carolina.,

As of 2 a.m. Eastern time, Elsa was about 115 miles west of Charleston, S.C., and moving north-northeast at 16 miles per hour, the National Hurricane Center said.

Rainfall of up to five inches was expected in southeastern Georgia and coastal South Carolina, with isolated totals of up to eight inches. The storm, with maximum sustained winds of 45 m.p.h., was forecast to weaken as it moved over Georgia and into the Carolinas on Thursday. It was expected to pass near the Mid-Atlantic States by evening and move into the Northeast on Friday.

Overnight there were reports of tornado damage across South Carolina, as residents shared pictures of downed trees and debris scattered across roadways on social media.

As of 4 a.m. Eastern, more than 35,000 customers in South Carolina and more than 12,000 in Georgia were without power, according to PowerOutage.us, a database that compiles power outages across the United States.

Elsa made landfall on Wednesday morning in Taylor County, Fla., southeast of Tallahassee. One person was killed as storms moved through north Florida on Wednesday afternoon, after a tree fell and hit two cars, according to the Jacksonville Fire and Rescue Department. At least 10 people were reported injured at a submarine base in southern Georgia after a possible tornado touched down 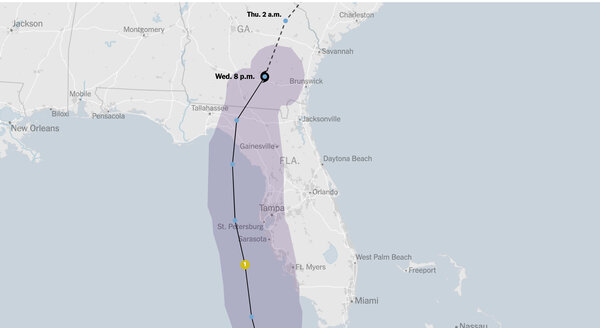 The storm is expected to bring heavy rain to Florida this week.

Elsa is the fifth named storm of the 2021 Atlantic hurricane season. The first, Ana, formed on May 23, making this year the seventh in a row that a named storm developed in the Atlantic before the official start of the season on June 1.

Last month, Tropical Storm Claudette brought heavy rains, gusting winds and tornadoes to several states across the South, destroying dozens of homes. It was blamed for the deaths of 14 people — 10 of them children — as it moved from the Gulf Coast to the East Coast. Claudette was closely followed by another tropical storm, Danny, which made landfall over South Carolina in late June before dissipating over Georgia.

The links between hurricanes and climate change are becoming more apparent. A warming planet can expect to experience stronger hurricanes over time, and a higher incidence of the most powerful storms — though the overall number of storms may drop, because factors like stronger wind shear might keep weaker storms from forming.

Scientists with the National Oceanic and Atmospheric Administration forecast that there would be 13 to 20 named storms this year, six to 10 of which would be hurricanes, and three to five major hurricanes of Category 3 or higher in the Atlantic. Last year, there were 30 named storms, including six major hurricanes, causing meteorologists to exhaust the alphabet for the second time and move to using Greek letters.

Trump Tax Returns Must Be Given to Congress, Justice Dept. Says