NASA’s InSight mission revealed Mars’s inner workings down to its core, highlighting great differences of the red planet from our blue world.,

The fate of almost everything on Earth’s surface is determined by infernal engines deep below. Mars is no different. Now, thanks to an intrepid robot parked on the Martian surface by NASA in November 2018, scientists have a map of our neighboring world’s geologic abysses, the first ever made of another planet.

NASA’s InSight lander has been listening to marsquakes and tracking their seismic waves as they journey through the planet. A trio of papers published Thursday in the journal Science, using data InSight has collected, reveals the red planet to be something like a colossal candy treat imagined by a ravenous deity. Its crust is split into two or three layers of volcanic chocolate. The mantle below has a surprisingly sizable and rigid toffee-like filling. And the planet’s core is surprisingly light — less nougaty center, more syrupy heart.

Paired with recent activities at the surface by new NASA and Chinese robotic rovers, these missions highlight stark differences between our blue world and the red one next door.

This survey of the Martian insides has been a long time coming. Earth’s solid-but-squishy mantle was first glimpsed in 1889, when seismic waves from a quake in Japan dove in and out of the layer before emerging in Germany. Earth’s liquid outer core was discovered in 1914, and the solid inner core was revealed in 1936. Similar measurements of the moon were made when the Apollo astronauts left seismometers on its surface.

Now the same basic and foundational measurements have been made on Mars. This work, conducted with one of the most technologically advanced seismometers ever built, represents “a major leap in planetary seismology,” said Paula Koelemeijer, a seismologist at Royal Holloway, University of London who was not involved in the research but co-wrote a perspective article in Science. 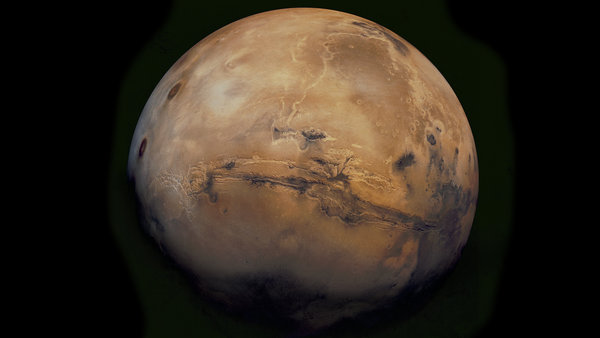 The InSight spacecraft arrived at Mars in 2018 to listen for marsquakes and study the planet’s structure.

Earlier missions to Mars have provided rough estimates of the dimensions and properties of its innards. But InSight’s seismological surveys provide precision. Models used to simulate the evolution of Mars can now be built on the foundations of these ground truths.

Revelations from the InSight mission will also be useful for studying other worlds by providing scientists with an example that differs from Earth.

“If you’re a doctor, and you only practice on one patient, you’re not going to be a very good doctor,” said Mark Panning, a planetary seismologist at NASA’s Jet Propulsion Laboratory in Pasadena, Calif., and a co-author on all three papers.

Mars is more like a cousin of our planet than a sibling. Six times less voluminous, it is strangely small — and geochemical evidence suggests that “it’s this really ancient relic of the early solar system,” said Christine Houser, a seismologist at the Earth-Life Science Institute in Tokyo who was not involved with the research.

Why is diminutive Mars so physically different from Earth and Venus, a planet thought of as Earth’s geologic twin? InSight’s forensic examination improves scientists’ chances at finding an answer — and, in the process, better understanding our planet’s place in the solar system.

Over the past two years, the InSight lander has studied the red planet’s magnetism, its wobble as it orbits the Sun and the seismic waves created by its marsquakes.

Most marsquakes occur at shallow depths. But a handful emanate from deeper locales, ricocheting through the planet before reaching InSight. Seismic waves change speed and direction as they traverse different materials, so scientists could use these deep-seated quakes to see what’s going on inside Mars.

It hasn’t been easy going. Working with a solitary seismometer means scientists get a decent look at just one region on Mars rather than the entire planet. And, to construct a detailed picture of the subsurface, plentiful powerful quakes that pass through much of the planet’s depths would be ideal. Unfortunately, Mars’s seemingly infrequent quakes are never more potent than a magnitude 4.0.

“We just had to push forward and see what we could do with this data,” said Brigitte Knapmeyer-Endrun, a planetary seismologist at the University of Cologne and lead author of the paper on the Martian crust. Despite the challenges, the team managed to make a detailed X-ray of Mars’s guts.

Scientists confirmed that the crust is thicker in the southern highlands and thinner in the northern lowlands, where ephemeral oceans may have pooled long ago. On average, the planetary crust is between 15 and 45 miles thick. It is also split into a top layer mostly made of volcanic rock shattered by meteorites, a middle layer of more coherent volcanic rock and, perhaps, a lower layer whose properties cannot be made out for the time being.

Like Earth’s, Mars’s mantle is far thicker than its crust. But the rigid part of the upper mantle, which on Earth forms the base of ever-shifting tectonic plates, is perhaps twice as thick on Mars, maybe more.

This “might be the simple explanation why we don’t see plate tectonics on Mars,” said Amir Khan, a geophysicist at ETH Zurich in Switzerland and co-author on all three studies. Such rigidity may have prevented the fragmentation of Mars’s upper layers into individual tectonic plates, robbing it of the sculptor that gave Earth such diverse mountains, ocean basins, volcanoes and continents.

Mars’s mantle also clues us in to why a planet that once built volcanoes as wide as Arizona and frequently erupted lava flows that could have covered Great Britain now is so geologically lethargic.

A planet’s major volcanic and tectonic activity is essentially powered by the movement of heat from a planet’s inner sanctum to its outermost shell. The seismic waves reaching InSight indicate Mars’s mantle is relatively cold, preventing significant geologic activity up top.

InSight also found that its mantle as a whole is about half as thick as Earth’s — a lack of insulation that would have exacerbated Mars’s heat loss as it erupted heavily in its youth. (Mars’s small size also allowed plenty of its primordial heat to radiate into space.)

This thin mantle may also partly explain why Mars lost its protective magnetic field in the first 700 million years of its history. Earth’s magnetic field is powered by the circulation of iron-nickel currents within its liquid outer core. Presumably, Mars had a similar circulation, but the speedy cooling of its innards caused those currents to seize up, shutting off its magnetic dynamo.

Without a magnetic bubble to shield Mars from the sun’s radiation, its atmosphere was blown away like confetti. Water that once frequented its surface — if it was not soaked up by the rocks below — escaped into space, turning it into a frigid, irradiated desert.

InSight also saw Mars’s core. With a radius of 1,140 miles, it is bigger than expected. It is also not very dense, which is “one of the most intriguing results we’ve found so far,” Dr. Khan said.

Earth’s core is rather dense because the planet is much larger than Mars, so all that weight squashes the core together. Mars, being tiny, was expected to have a slightly less compressed core. But InSight found that it is half the density of Earth’s, something planetary compaction cannot explain.

This means that Mars’s core must be made of different stuff. Like Earth, it still contains a preponderance of iron and nickel, but it also features a sizable fraction of lighter elements, like oxygen, carbon, sulfur and hydrogen. The Martian nucleus’s unusual chemistry is another hint of the red planet’s distinctive formation history.

Despite the successes of humanity’s first interplanetary seismic survey, many questions remain to be answered. No detected marsquake has been powerful enough to reach the very center of the planet, so scientists don’t know if, like Earth, Mars has a solid inner core. All that can be said for now is that it has a liquid outer core — albeit a more slurry-like, sluggishly moving one compared to Earth’s own.

Marsquakes themselves remain confounding. They may be the key to seeing inside the planet, but their origins are heavily debated. Many shallow quakes, for example, are more intense and more frequent during Martian winters. “That is strange, because on Earth you don’t have clear seasonal quakes,” said Simon Stahler, a seismologist at ETH Zurich in Switzerland and co-author on all three papers.

InSight’s scientific expedition has been extended to December 2022, so as more marsquakes come in, these puzzles may be solved. But buildup of dust on the lander’s solar arrays may kill off the robot within the year.

Whether it perishes sooner or later, InSight is already a veteran of Mars. More recent robotic visitors are just getting going. China’s Zhurong rover, which landed in May, is exploring another region, Utopia Planitia, and taking photographs of the parachute that helped it safely land.

NASA’s Perseverance rover, which landed in Jezero — a 30-mile crater once home to a lake filled by a river delta — in February, has been warming up for its main act: the search for signs of ancient microbial life.

On Wednesday, Jennifer Trosper, the Perseverance project manager, announced that the mission had tested out one of the rover’s most important functions: the ability to open up one of its finger-size sample tubes, seal it and store it inside the rover.

Perseverance’s primary objective is to drill into Jezero and obtain at least 20 different rock cores. These pristine Martian samples are to be delivered to Earth in 2031, where they will be subjected to intense scientific scrutiny. The team is now preparing to snatch up and store the mission’s very first rock sample sometime in August.

Perseverance is poised to revolutionize scientific understanding of the Martian surface. InSight has delivered revelatory access to the Martian underworld. The paradigm-shifting endeavors of these missions mean that, one day, we may claim to know not one, but two planets, inside and out.

Sync your calendar with the solar system

Never miss an eclipse, a meteor shower, a rocket launch or any other astronomical and space event that’s out of this world.

Heart Problems After Vaccination in U.S. Are Uncommon and Short-Lived, Researchers Say

Biden, in a Push to Phase Out Gas Cars, Will Tighten Pollution Rules