The United States Capitol Police closed off several streets and evacuated government buildings near the Library of Congress after a man in a truck threatened security, claiming he had a bomb, the police said.

Around 9:15 this morning, a man in a black pickup truck drove onto the sidewalk in front of the Library of Congress, near First an Independent Southeast. We responded to a disturbance call. The driver of the truck told the responding officer on the scene that he had a bomb, and what appeared, the officer said appeared to be a detonator in the man’s hand. So we immediately evacuated the nearby buildings. As you all know, the House and Senate are on recess, and — but there are still people working throughout some of the buildings that were nearby this location. I don’t want to get into the negotiations that are ongoing. I know that some information has come out, been livestreamed. So I know you all may have some information, but my negotiators are hard at work trying to have a peaceful resolution to this incident. Not only do we have U.S. Capitol Police on the scene, but Metropolitan Police Department, of Washington, D.C., is with us, the F.B.I., Washington field office, A.T.F. and of course, D.C. Fire and E.M.S. 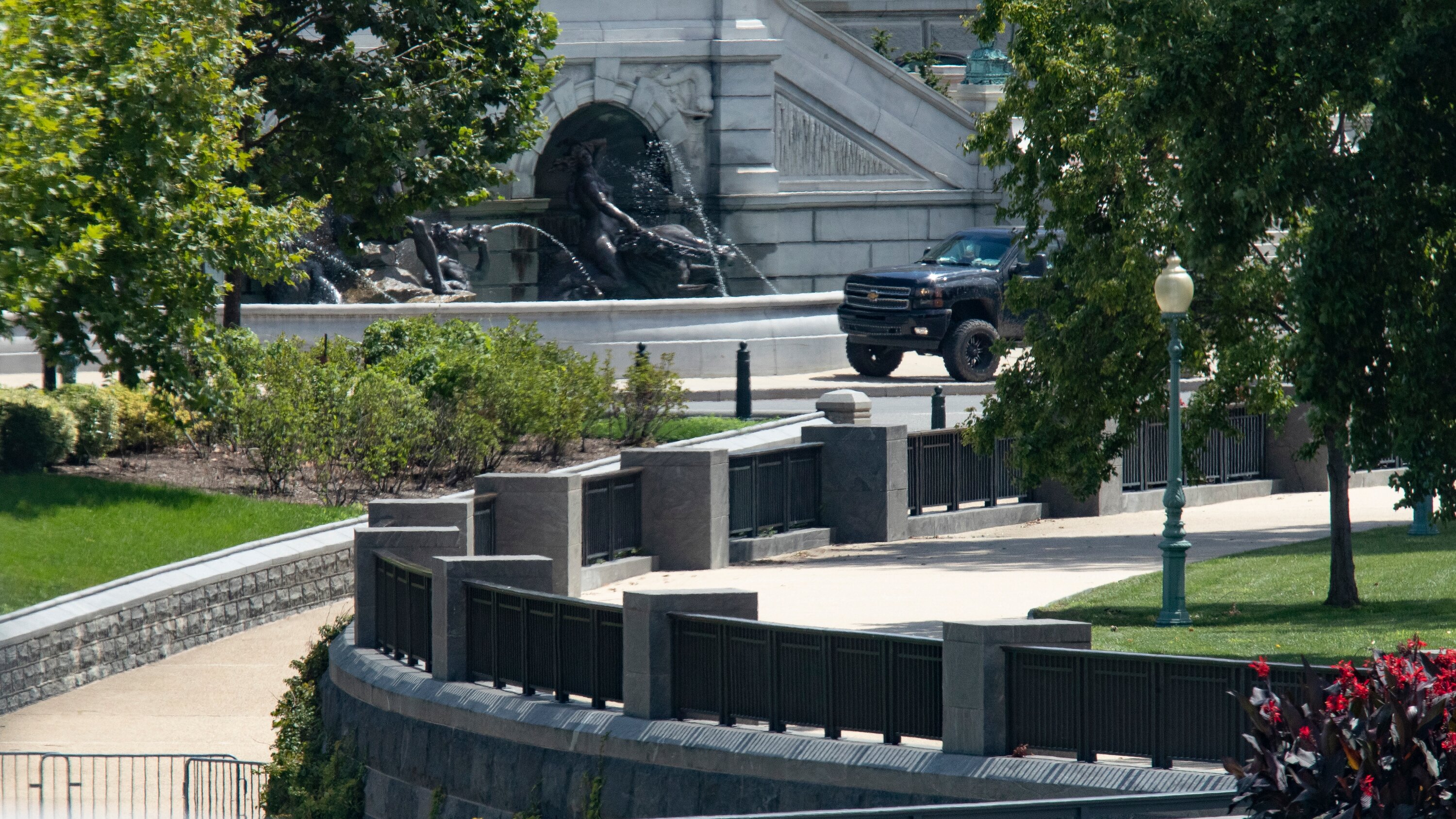 The United States Capitol Police closed off several streets and evacuated government buildings near the Library of Congress after a man in a truck threatened security, claiming he had a bomb, the police said.CreditCredit…Tom Brenner for The New York Times

By Emily Cochrane and Maria Cramer

WASHINGTON — A man who claimed to have a bomb in a pickup outside the Library of Congress surrendered to the police on Thursday, after hours of negotiations and evacuations of several government buildings in the area.

“As far as we can tell it was just his decision to surrender,” he said. Chief Manger identified the man as Floyd Ray Roseberry and said it appeared that he acted alone.

Mr. Roseberry, 49, drove a black pickup onto the sidewalk of the Library of Congress at about 9:15 Thursday morning, and officers then responded to a disturbance call, Chief Manger said.

When the police arrived, Mr. Roseberry said he had a bomb and one of the officers observed what appeared to be a detonator in his hand, Chief Manger said. It was unclear whether the truck actually contained any explosives.

The police spent hours negotiating with Mr. Roseberry, the chief said. At one point, the police used a robot to bring a telephone to Mr. Roseberry but he declined to use it.

“We don’t know what his motives are at this time,” Chief Manger said earlier Thursday. He confirmed that some of the man’s remarks had been streamed live on social media.

Chief Manger later told reporters that officers had observed items on Mr. Roseberry’s truck that concerned them, including a propane gas container. He said technicians would have to examine the contents of the truck to determine whether there were any explosives.

He said that charges against Mr. Roseberry would be determined with the U.S. attorney’s office.

Mr. Roseberry, a resident of Grover, N.C., was making anti-government statements, according to a law enforcement official. Chief Manger said that the police had spoken with members of Mr. Roseberry’s family.

Andy Stone, a spokesman for Facebook, confirmed that the company had taken down the man’s profile from the site and Instagram, and removed a post with a video broadcast from the truck. The company said it would also remove any posts supporting or praising the man.

In the rambling video, he addressed President Biden, demanding to speak with him or a representative, and sometimes showed a metal object in his lap. He described himself as “a patriot” and expressed grievances with Democrats. He repeatedly said he did not want to die or hurt anyone but warned that the device would explode if the police fired at him, though he offered no evidence to support that.

In alerts to Capitol Hill staff members on Thursday morning, the police urged some people to move inside offices, lock doors and stay away from windows, and told others to evacuate to designated assembly areas.

The Metropolitan Police Department assisted “with the report of an active bomb threat involving a suspicious vehicle,” and with evacuating the area, according to a spokeswoman, Alaina Gertz.

With lawmakers scattered across the country for a scheduled August recess, most congressional staff were not on Capitol Hill when much of the complex went into lockdown. Many of the evacuated employees work for the library and included Architect of the Capitol staff, building employees and workers helping with construction. And while thousands of people typically work in each office building, the pandemic has limited how many people were inside.

“Today, once again, the Capitol Police, F.B.I. and other law enforcement dealt with a potential threat to the Capitol Hill community,” said Speaker Nancy Pelosi of California in a statement. “The immense gratitude of the Congress is with all law enforcement officers who today and all days sacrifice to keep the Capitol Complex and those within it safe.”

As the police investigated, they shut down several nearby streets around the 100 block of First Street SE. Technicians from the F.B.I. and the Bureau of Alcohol, Tobacco, Firearms and Explosives joined the officers at the scene.

Just before 11 a.m., dozens of people flooded out of the Madison building, having been told by officers inside to leave the building.

“Everybody head south now,” a Capitol Police officer said as other officers ushered construction workers away from work in the road and asked diners outside a cafe to leave their tables.

Ultimately much of the crowd, some carrying laptops and tangled handfuls of charging cords and headphones, ended up in a park near the building, calling family members and figuring out how to get home.

The threat unsettled visitors and employees at the Capitol, about seven months after a mob of Trump supporters stormed the Hill on Jan. 6, in a violent attempt to prevent Congress from certifying the results of the presidential election.

While the Capitol has worked to return to normal, including recently taking down the fences surrounding the complex, many of the people working in the complex continue to grapple with lingering trauma from both the Jan. 6 riot and the death of a Capitol Hill officer in early April.

The precautionary steps to investigate suspicious packages have become more intense for staff on the Hill, amid heightened security precautions. On Thursday, police sharpshooters were visible from the Capitol building, focused on the pickup by the Library of Congress.

Employees in the nearby office buildings were notified of the possible threat through alerts, before officials came over the building intercom to instruct people to leave the building.

Once on the street, employees were told to go home or head away from the complex, although some could not reach their cars and the nearest Metro stop appeared closed.

“They’re just being cautious — they don’t want to take chances,” said Paul Hines, a building services employee evacuated from Madison. Mr. Hines, livestreaming a news report on his phone, had left his phone charger, his lunch and most of his belongings inside.

“Wasn’t expecting this,” he added. “I was about to eat my lunch.”

Human Remains Believed to Belong to Gabby Petito Are Found